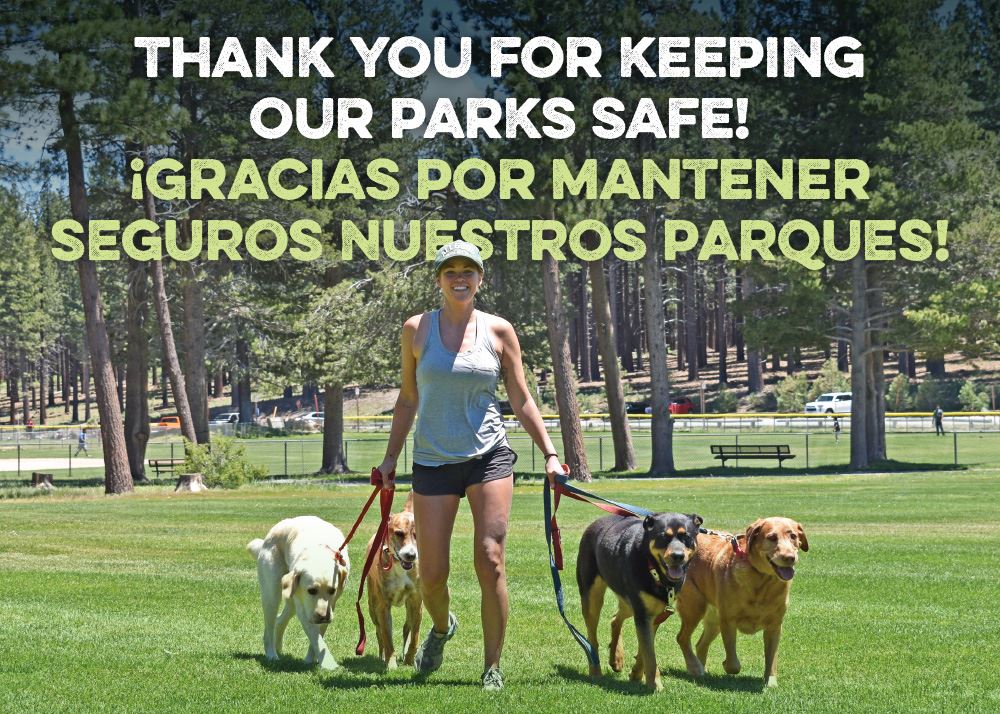 Dog waste in our parks is an escalating environmental issue and a significant health risk for the many children and adults who recreate on our fields and playgrounds. Please help keep our parks safe by keeping your dog on a leash at all times, picking up your dog waste and properly disposing of your dog waste in a trash bin. Our public parks should be a safe and enjoyable experience for all.

It is estimated that a single gram of dog waste can contain 23 million fecal coli form bacteria, which are known to cause cramps, diarrhea, intestinal illness, and serious kidney disorders in humans.

Dog feces are one of the most common carriers of the following diseases:

According to the U.S. Centers for Disease Control and Prevention (CDC), pet droppings can contribute to diseases animals pass to humans, called zoonoses. When infected dog poop is deposited on your lawn, the eggs of certain roundworms and other parasites can linger in your soil for years. Anyone who comes into contact with that soil—be it through gardening, playing sports, walking barefoot or any other means—runs the risk of coming into contact with those eggs; especially your dog.

Children are most susceptible, since they often play in the dirt and put things in their mouths or eyes.

Dog waste is an environmental pollutant. In 1991, it was labeled a non-point source pollutant by the Environmental Protection Agency (EPA), placing it in the same category as herbicides and insecticides; oil, grease and toxic chemicals; and acid drainage from abandoned mines.

Dog fecal matter is a major contributor to stormwater pollution. When feces is allowed to remain on soil for long periods, rainstorms (or melting snow) will begin to dilute and break apart the feces and slowly spread the bacteria on other contaminants into local water sources. If areas hold water for extended periods of time (e.g. snow packs), the problem may be amplified. When in water, the liquefied waste consumes the oxygen and releases ammonia, which contaminates our resources as well as harms the fish that reside there. It is as high as 3rd on the list of contributors to contaminated water.

EPA even estimates that two or three days’ worth of droppings from a population of about 100 dogs would contribute enough bacteria to temporarily close a bay, and all watershed areas within 20 miles of it, to swimming and shell fishing. Shady Rest Park was a biohazard at the end of winter.

Woof-woof waste does not make for a good fertilizer. It is actually toxic to your lawn, causing burns and unsightly discoloring.

Some communities are enlisting high-tech solutions such as DNA testing or video surveillance to track culprit dogs and their owners.

Peer pressure and the “policing of each other” that comes with increased awareness is also helpful - “I’ve gotten into the habit of always carrying extra bags with me when I take my dogs out,” wrote NatureNerd in a comment on July’s story. “When I see someone not picking up after their dogs, I will walk up to them and say, ‘Oh, did you forget a bag to pick up after your dog? That happens to me too. Here, have one of mine.’ So far, has worked every time.”

There have been 24 documented dog bites within the Town of Mammoth Lakes since January 2018.

A person may be distressed, uncomfortable or afraid of dogs including but not limited to the elderly and small children. Be a good neighbor and be respectful of all people and pets enjoying our municipal parks.

The younger the child the more likely they are to be bitten on the head, face or neck.

We had one dog bite incident during our summer camp this summer at Volcom Brothers Skate Park.

Some people may be distressed, uncomfortable or afraid of dogs in public spaces including but not limited to the elderly and small children. About 5 percent of people are scared of dogs, which, in theory, means one out of every 20 people you walk past can be stopped in their tracks from fear.

Leash laws protect the public, because most dog bites and attacks against humans outside the home happen when dogs are not on a leash. Leash laws also protect dogs who might run into traffic and get injured or killed, and other dogs that might be attacked by an off-leash dog.

Around one out of every three dogs has a noise phobia. But all sudden, loud sounds can scare dogs Just one loud sound, and an unleashed dog could bolt, putting him/her in danger.

"It is unlawful for any person owning, harboring, or having the care, custody or possession of any dog within the town limits of Mammoth Lakes to allow such dog to run at large. All such dogs shall be kept securely fastened by a chain, rope or leash unless securely confined within private property legally controlled by the person in possession of the dog. Further, any dog off the premises of its owner, or the person charged with the care, custody or possession of the dog, shall be presumed to be at large unless it is securely fastened to a rope, chain or leash not exceeding six feet in length and is under the immediate physical control of a competent person. The provisions of this section shall not apply to any dog while being trained in an obedience class or being exhibited at a dog show or obedience trial or being trained for or used for bona fide hunting purposes, or that is engaged in the herding, grazing or control of livestock; provided, however, that such dog is under the immediate vocal control of a competent person while so engaged."

"Dogs and cats are prohibited on park property unless kept on a leash at all times and under full control of the owner. The removal of feces of animals who defecate on park property is required of the owner or custodian of the animal. Horses, mules, goats, donkeys or similar animals are not permitted on park property unless granted by permit of the town manager. No animal shall be allowed to graze or run at large within the boundaries of a town park. No animal shall be killed, harmed or removed from any park unless by a town employee during the performance of official duties."

Pets are allowed on all U.S. National Forests but must be kept on a leash no longer than 6 feet at all times while in developed recreation areas and on interpretive trails. Most other areas within the National Forest do not require dogs to be on leash but they must remain under voice control at all times. According to the Mammoth Lakes Visitors Center developed recreation areas include parking lots and bathrooms.  Dogs must remain on leash in the Lakes Basin but once you get on a trail head beyond the parking lots and bathrooms you are welcome to take your dog off leash as long as it remains under voice control. Please contact the Mammoth Lakes Visitor Center for more info.